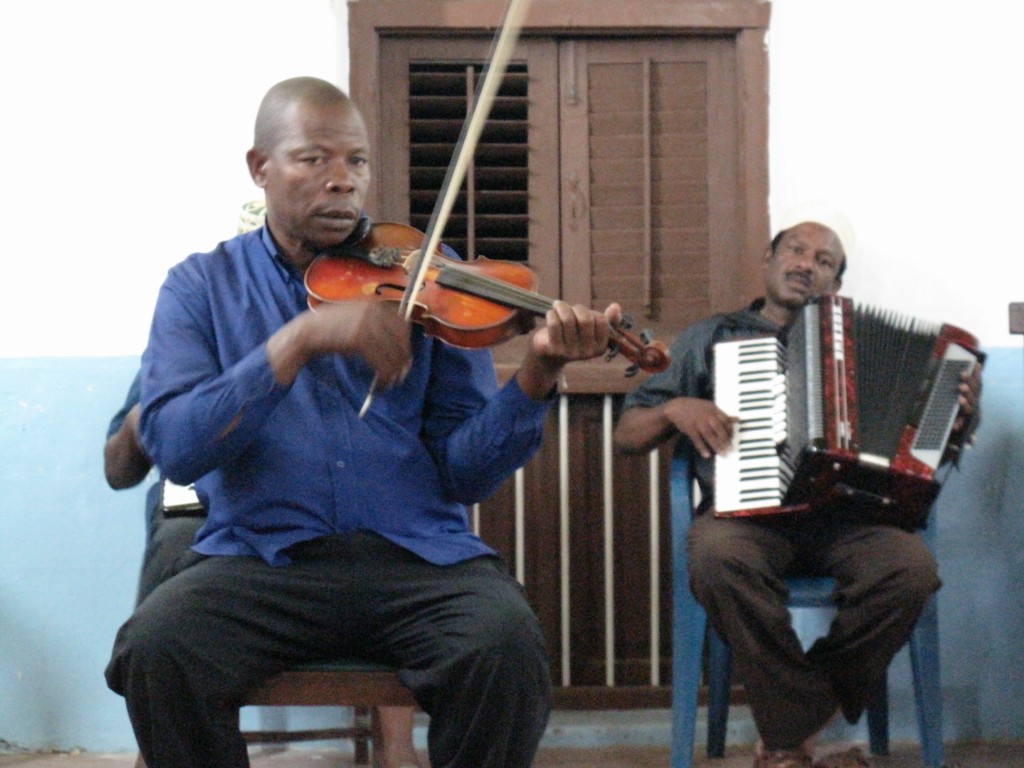 It is Eid ul-Fitr here in Paris, so a little post on music in Zanzibar from this summer, sorry for the non-Paris content. (more Paris stuff coming soon!)

It is hard en

ough these days to chase down authentic traditional musicians, so imagine trying to find accordionists and fiddlers in the serpentine streets of Zanzibar… all the while racing against a rapidly waxing crescent moon over the Indian ocean.

Ramadan started early this year and on the island archipelago of Zanzibar off the coast of East Africa, most of the devoutly religious Muslim population observes the month-long fast from sundown to sunset. Unfortunately for intrepid amateur ethnomusicologists like yours truly, this also meant that the local music scene goes silent for the month. Zanzibaris wake up at 4am to eat and break the fast at nightly Iftars with their family – musicians more or less go on hiatus. So although we cursed ourselves for planning a trip to one of the most fascinating cultural melting pots in the world during its most solemn and introspective moment, we made sure to arrive at least three days before the onset of Ramadan in early August.

The crescent moon signals the start of Ramadan so we were literally up against the moon to catch some great local music, particularly the exotic, languid sounds of Taarab. Zanzibar is considered the spiritual epicentre of the Swahili culture that covers most of coastal Tanzania and Kenya and Zanzibari Taarab is this culture’s defining musical style.

Zanzibar was home to the 19th century Omani Sultans, and is a colourful mix between Arabic and mainland African culture. Arab and Indian traders have been plying the coasts of East Africa for thousands of years, giving birth to Swahili, a Bantu language with strong Arabic roots. Walking around Stone Town in Zanzibar, with veiled women darting into dark, spice-scented alleyways past ornate ancient wooden doors inscribed with passages from the Koran, this diverse culture heritage is plainly evident. 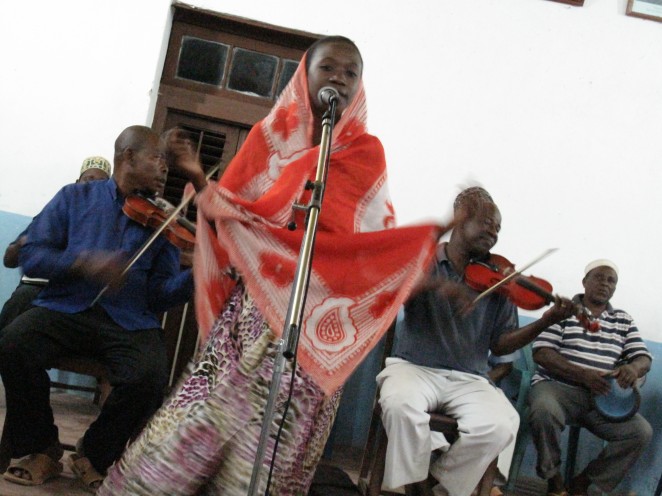 Taarab music exemplifies this pungent mix between Africa and the Middle East. Today, electrified modern Taarab blasts out of storefronts throughout Zanzibar, but we were seeking “old school” Taarab, the famous music of the court of Sultan Barghash bin Said of Zanzibar. We’re talking Middle Eastern melodies and ornamentation with strong African rhythms topped off with classic Western touches, such as the cha-cha-cha (yeah!). The classic Taarab orchestra includes oud, fiddles, kanun, some African percussion all topped off with Western touches like the accordion and upright bass.

Suffice to say, I was determined to catch some of this before the holy month started.

A local friend told us that our best bet for catching some old-timey Taarab would be a marriage. There are always plenty of weddings before Ramadan on the island. Some said it was to get in a last bit of partying before the holy month. Others said it was because local men wanted to be sure to have someone cook to for them during the holidays. Whatever the reason, our first night we got in a taxi and started hitting bars and wedding venues.

As the cab speed down the poorly lit and chaotic streets in the outskirts of Zanzibar city, we passed plenty of weddings in huge open-air courtyards, live modern Taarab music blaring while women in colorful veiled Kangas danced in circles around the bride. But no old timey Taarab.

Night 2: Taarab School and a Game of Dominoes

With the clock (moon) ticking, we decided to visit the two modern temples of Taarab music, the Dhow Countries Music Academy and the Culture Musical Club. Although the Academy offers obligatory drum courses to dreadlocked Italian tourists, it also plays an important role in passing down Zanzibar’s musical traditions to the next generations. The Club is well-know, but we were sure to find what we were looking for.

Like many buildings on the waterfront of Zanzibar city, the huge Academy had an intense rundown, ex-colonial charm. A security guard at the entrance sleepily asked us sign to sign a resister – Tanzanians love registers – and we walked up to a vast open-air courtyard on the top floor. It was quite a busy scene. Music students were running around with accordions, fiddles, ouds and upright bases. There we met Moh’d Othman, an instructor at the Academy and got him to share some Taarab tunes:

(2nd part with one of his fiddle students)

Later that night we crossed town to the see the revered Culture Musical Club. Founded in the 1950s as a political youth movement, the Club today are the foremost performers of old style Taarab and often travel abroad. They play pure Taarab in all its orchestral glory and still have a busy schedule of wedding gigs.

Like Buena Vista, the Culture Music Club is a real social club and members gather at its HQ to hang out, play dominos and one imagines, occasionally play music. Moh’d told me to go there and catch a practice but when we showed up at the the Club HQ, there was just one accordion player reading a newspaper in a vast empty room. “No practice now, come back later” he told me. And thus began our epic journey with the fine gentlemen of the Musical Club.

We did come back later, only to find a few more men lounging around. “No practice, come back tomorrow,” was the answer, something we got used to hearing.

Night 3: Negotiating with the Board of Directors

After repeated attempts (“no pratice, come back later”), we returned to the Club one last time. About twenty men were deep in a dominoes game  and a large group of women sat in another room, gathered around a blaring TV. After an exchange of pleasantries, I popped the question.

“What practice?” asked the same man from the other night. “There is no practice tonight.” “Come back in a month,” said another. My ethnomusicologist dreams crumbled in front of my eyes. Ramadan was starting the next day and we were leaving Zanzibar for the mainland. Would I actually set foot on the archipelago and not see a full Taarab orchestra in action?

Luckily, I happened to be surrounded by 20 of the best Taarab musicians in the world who just, erm, didn’t feel like “practicing.” After all, the Cultural Musical Club is a social club, and tonight the ordre du jour seemed to be dominoes and Nigerian soap operas.

An hour of negotiation followed. If Taarab is a mix between cultures, the Culture Musical Club is a mix between a Bingo Hall and a government ministry with all the requisite bureaucracy and administration. I discussed/negotiated with the Treasurer, Accountant and finally Secretary General of the Club, in that order.

Finally, after an hour of high-level “negotiations,” the band set up: 3 fiddles, 2 accordions, 2 percussionists, kanun, upright bass, ney flute, keyboard and oud. The women got up from around the TV and lined up plastic chairs next to us – we naively thought they were there to listen. The band started with a powerful overture and eventually one of the women stepped up from the crowd to sing. Women singers dominate Taarab and the lyrics can be quite bawdy, dealing with rough-and-tumble subjects.

It was at that point that we realized why negotiations were so tough – the women weren’t audience members. They were in fact a 12-women chorus, filling the dingy club HQ with some of the most powerful ensemble singing I’ve ever heard. They never got up from their plastic chairs, belting out achingly beautiful call and response to the lead singers sensual lead vocals.

The Club’s Board of Directors wasn’t so hot on filming, so I only have a few shots, taken during the 1st song when we realized that the rest of the  “audience” wasn’t an audience.

Content with our musical adventures, we went to the roof of our hotel at dusk on our last night to welcome the beginning of Ramadan. High up over the tin roofs and windy streets of Stone Town, we could hear at least 10 different amplified muezzins calling to prayer, all the voices mixing together in one glorious harmony. Down in the harbour a group of fisherman crowded on a wooden boat for their evening prayers:

After running around town rushing in music before Ramadan, we were treated to one last wonder of Zanzibar before we left.

I've recorded traditional and folk music that I've encountered around the world. Click around this interactive map to hear the tunes!